River or fluvial flooding occurs when too much water arrives at any given point on the river system at one time overcoming the available in bank volume at that point. The diagram below illustrates this. At a given point the river channel has a known width, gradient and bed type (rock, concrete, gravel, cobbles and/or boulders). If the depth of the river is measured then the volume of water can be calculated using these parameters. This is known as discharge and is given the units metres cubed per second (Cumecs).  This volume varies with time during the storm as the water takes time to arrive at the main river channel from the catchment where it falls. This is called basin lag or lag time.

The above graph called a hydrograph is a plot of discharge against time and it also shows rainfall on the vertical axis. The horizontal red line shows the bank full discharge.  In other words if the flood peak breaks above this point, the river will flood the surrounding areas.  By increasing the time for the water to arrive at this point the curve will flatten or “squash” below the red line and the river will remain in bank.

Stuart Bradshaw explains the storm hydrograph at our public meeting:

Ideally we want the river to flood in areas that are not critical to our towns and villages and if we can do that we can slow the arrival of that water at the main channel. We can “squash” the curve by introducing interventions higher up the catchment to achieve the desired results downstream and this is what we mean by “slow the flow”.

Slow The Flow Calderdale is committed to seeking solutions to the flooding problem in the Calder Valley by slowing the flow by various means such as the following:

These measures can, given careful thought, planning and implementation reduce the amount of expensive “hard” civil engineering more often used to deal with the effects of flooding. Raising river walls is so often deemed the only answer to this problem, yet time and time again it has been shown to merely shift the problem further downstream.  This is aptly illustrated in the Calder Valley by the works carried out in recent years in Todmorden and their effects on Boxing Day 2015 further downstream at Eastwood, Charlestown, Hebden Bridge, Mytholmroyd, Luddendenfoot and Sowerby Bridge.

How can you help?

We are looking for sites in the catchment, particularly the upper catchment areas where we can introduce these interventions. If you know of land containing brooks or ditches, old mill ponds or any type of watercourse, and that could mean a track that is normally dry but runs like a torrent during heavy rain, then please get in touch via our contacts page and let us know where these areas are and preferably who owns them.

Look here for more information on how you can get in touch and help. 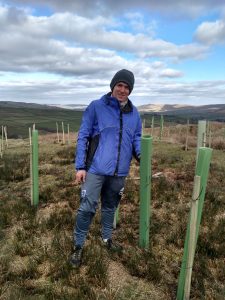 A special guest blog post on PHD research, which was partly based in the Upper Calder Valley. NFM is oft-under-proven, 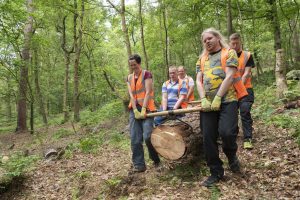 A new annual bursary has been set up to support Master’s students investigating natural flood management. The bursary is named 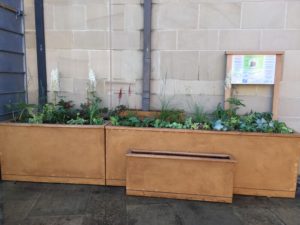 Initial results in from rain garden planters – they work!

Traditional methods proved to be either inappropriate, or too expensive, for monitoring of the small scale rain garden planter project 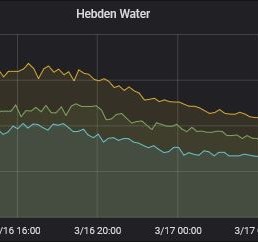 After the recent deluge, it would appear that the 340+ leaky dams built in Hardcastle Crags have done their job,

Case Study 1: Flood alleviation at Oldroyd, Todmorden, Upper Calder Valley  On Boxing Day 2015 the hamlet of Oldroyd (OS 3949 4241) which comprises a street of